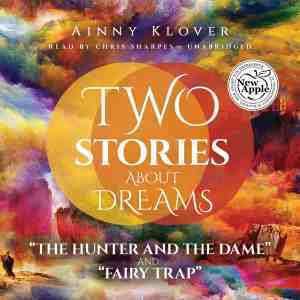 Author Ainny Klover’s audiobook, Two Stories About Dreams, has received the prestigious 2016 New Apple Book Award for Excellence in Independent Publishing. The ethereal audio program includes The Hunter and the Dame and Fairy Trap. This is the first award the author has received.

The award galvanizes the enthusiastic reception the work has received from enchanted listeners on Audible.com. Numerous 5-star reviews are peppered with words such as romantic, delightful, imaginative and brilliant.

With Two Stories About Dreams, two enchanting stories are brought together in a single audiobook. In The Hunter and the Dame, a young hunter travels to Sun City, seeking a night’s lodging. What starts as a simple journey becomes the ultimate test of his mettle as he defeats a dragon and loses his heart to a woman who possesses both beauty and nobility. But did it all happen just as it seemed?

Fairy Trap highlights the journey of a traveler on a night tram. He drifts into sleep and falls prey to three enchantresses who vie to seduce him. Will there be a winner? And does he truly awaken? The traveler learns that sometimes dreams linger on.

Bryan Heathman, President of Made for Success Publishing, says: “Prior to the audiobook release, we knew this was going to be a hit. The quality of the writing is exceptional, and the production values are high.” Heathman goes on to add, “Working with Klover on such a unique project was a pleasure.”

About Made for Success Publishing

Ainny Klover was born was Moscow, Russia, studied applied mathematics at Moscow State University, and after obtaining his Ph.D. moved to the UK, then to Australia, and finally settled in the UK. His lifelong interest is music-making. In 2012, Ainny was challenged by a friend to write a short story. He took up the challenge but went a step further writing two and mixing them with the original music to create Two Stories About Dreams.