“In the grand scheme of things,” an author once told me, “there are no mistakes, only tests and lessons.” She was talking about a chapter from her own life—a trip along what I call the Road of Trials—but the principle can easily be applied as we trace the Hero’s Journey. 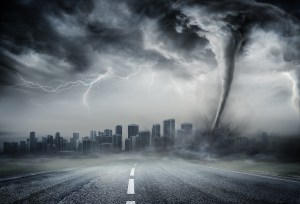 In fact and fiction, a single choice can mean the difference between comfort and toil, between wealth and poverty, even between life and death.

So far we have taken a detailed look at the craft of storytelling as it applies to the world of non-fiction and keynote speaking.

We met a hero, watched him leave home on an adventure, and have seen him in his darkest hour. But the tests are far from over. In fact, the pressure increases as the hero journeys along the Road of Trials.

This part of the adventure unfolds as the hero meets a series of seemingly unconquerable challenges in his quest to meet his ultimate goal. These might be deliberately designed to test him, or they may be incidental, a by-product of the adventure itself.

Would You Believe… Flying Monkeys?

One classic illustration of the Hero’s Journey can be found in “The Wonderful Wizard of Oz” by L. Frank Baum, as young Dorothy tries to get back to her home in Kansas from the Land of Oz.

As she travels along the Yellow Brick Road with her companions, the Scarecrow, the Tinman and the Cowardly Lion, Dorothy is thrust into a series of cataclysms that test her character and threaten her life. These trials ultimately teach her the lesson—the story’s theme—There’s no place like home.”

After her darkest hour, Dorothy and her friends finally arrive at the Emerald City. With some difficulty and a bit of delay, they’re granted an audience with the great and powerful Wizard of Oz.

They each ask for his help, but they all are given the same task before they can get satisfaction: kill the Wicked Witch of the West.

As Dorothy and her friends enter the Witch’s realm, she discovers the travelers and sends a pack of forty savage wolves to destroy them. But the Witch hadn’t counted on the Tinman’s ax, and the wolves are the ones who meet with a bad end.

Next, the Witch sends forty crows to peck at them, but the Scarecrow dispatches them.

The Witch becomes even angrier and sends a swarm of bees to sting the travelers to death – enough bees to darken the sky. But the Tinman uses the Scarecrow’s straw to cover Dorothy, Toto, and the Lion.

The bees find only the Tinman to attack, which proves to be their undoing. Bees can’t live once they have lost their stingers.

Finally, in desperation, the Wicked Witch of the West summons a band of flying monkeys. They do her bidding to destroy the Scarecrow and Tinman, and they capture the Lion, as she commanded.

But the monkeys are unable to harm Dorothy or her little dog because she has the protection of Glinda, the Good Witch who welcomed her to Oz.

It seems that all is lost and Dorothy is doomed to live out her days as a slave in the Witch’s castle. However, one day the Witch provokes her and makes her so angry that Dorothy throws a bucket of water on the Witch.

Little did the girl know that this is the one thing that could kill the Wicked Witch of the West. She melts into a puddle like brown sugar, and the whole kingdom is liberated.

With a little help, Dorothy frees the Lion, has the Tinman restored, and re-stuffs the Scarecrow. After their happy reunion, the companions set out to confront the all-powerful Wizard of Oz and claim what he has promised them.

To place your hero on the Road of Trials, here are five things you can do to outline your non-fiction manuscript.

No matter how much your hero may struggle, his cunning, ingenuity and personal strength will see him through. The Navy Seals have a saying: “When your brain tells you that you’ve given it your all, you’ve only given 40%.”

Let your readers know that when you think you’ve given it all, you’ve only given 40%.

Every road trip has its end, even on the Road of Trials. What lessons will your hero encounter on his or her journey?