There is no such thing as luck. The “luckiest” people I know create their own luck. This is especially true in the art, like music and writing. As a book publisher, the best authors, speakers and executives I associate with are skilled in creating opportunities for themselves. 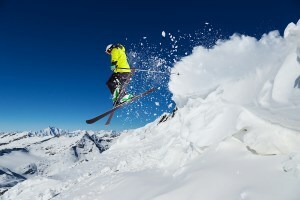 If business is built on relationships, then those relationships have to be handled with care from the start. Even in the early days of my career in corporate sales, I learned that deals are like dates: you can’t simply blurt out a proposal. It takes time and finesse.

Take for example an experience I had recently while on a ski trip to Utah. I watched as a daring young film producer scooped up opportunity like so much ice cream after a fine dinner. His bravado was all but shocking, yet it paid off for him.

I was invited by a filmmaker friend of mine to go on a ski trip this winter. He owns a residence at a beautiful mountaintop resort in Utah, and I hungrily agreed to go. He’d told me about it many times. I was looking forward to spending a week among the powder and aspens, getting some time away from my life of book publishing and deal making. You know, hitting the reset button with the feel of cold air on your face.

In spite of my eagerness to hit the slopes, the timing for the trip was less than ideal – I arrived during the middle of the Sundance Film Festival, the annual showcase where indie filmmakers get International exposure for their work. The town was overrun with 46,000 critics, celebrities and film producers.

If you’re like me, you enjoy film as much as the next person. But this trip was all about the epic Utah powder, not competition for space on the chair lifts or at the restaurants in Park City. I saw the festival as an obstacle, not a perk. Still, I suppose if you have to put up with inconvenience, it might as well be an incredibly glamorous inconvenience.

A car picked me up at the airport in style – a glossy black Escalade transported me to the ski lodge. As soon as I arrived, my skis were whisked away by an invisible staff member. I didn’t see my gear again until the next morning, when I found them waxed and ready at the base of the chair lift. It was truly a first class touch.

Later that day my friend gave me a tour of the slopes, where we skied through mountaintop neighborhoods with new construction that included private ski lodges worthy of an Austrian barony.

After skiing a bit too fast on the slopes (don’t tell anyone, but we actually got chewed-out in the lift line by a local for racing) we headed into the quaint town of Park City for dinner. We dined at a rustic restaurant, coincidentally owned by Robert Redford and filled with fellow adventurers from around the world.

Our restaurant reservations had to be made a month in advance, and when we finally arrived we couldn’t wait to sample their offering. The menu was inspired by wild fare you don’t typically find in many restaurants. After a study of the unique menu, I settled on a surprisingly tender elk steak with sautéed portabella.

As our waiter cleared the dinner plates, we finished off our Spanish Coffees and caught up about business and life generally. Except for the exotic game, it was a typical meal you could expect to enjoy in any upscale restaurant. But unlike most restaurants, the atmosphere was thick with expectation.

I was keenly aware that our dining conversation wasn’t private and that many ears were straining to hear the details we discussed. In spite of the lovely meal, it was a relief to get back out onto the street again, see the stars and breathe the crisp night air.

The local bars were jammed with movie stars and producers, and music from the nightclubs drifted through the streets. My crew of four ducked into an ice cream shop we’d found the year before, hoping to top off the meal with dessert.

It’s said that there is rarely a right time and place for striking a deal. The key is to take initiative. What happened next took this idea to a whole other level.

While we are sitting there in the ice cream parlor chatting it up over a waffle cone, a young couple approached us. I was thinking that back home in Washington, they might be asking for nightclub recommendations or maybe directions. This was far from what they had in mind.

The woman introduced herself as a Hollywood agent and the young man standing next to her as a film producer. He said hello courteously enough. Then without missing a beat, he launched into a pitch for his upcoming movie, plying the four of us for financiers attending Sundance.

He wasn’t just proposing on the first date – he hadn’t even asked for a date!

While I was sitting on my heels, amazed by this character’s audacity, the conversation took an interesting turn that I didn’t expect. To my surprise one of my friends was open to his pitch, always looking for the next opportunity. By the end of the conversation, we exchanged cards and agreed to stay in touch.

Time will tell if the brash young producer got lucky and his film will shine at next year’s Sundance.

In deal making, sometimes you need to size-up your opportunities and go to work, regardless of what others might think. Never underestimate the value of being prepared when opportunities come your way and making your own luck. Whether it’s a job promotion, fundraising, or a summary of your latest book, be prepared.