From the world of entertainment to the hallowed halls of our oldest universities, Story is king. The same can be said of professional speakers and best-selling authors. 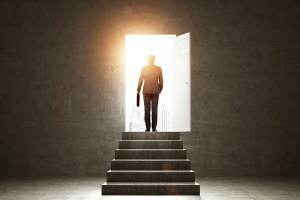 Stories have the ability to teach us, entertain us, and help us see through a window into another world. Even the bedtime tales that kids devour have their roots in the ancient traditions of storytelling.

One thing that almost all stories have in common is their basis in the Hero’s Journey, a thread that has been woven through myths and legends since ancient times. The Hero’s Journey is what makes up the fabric of stories.

In our previous installment of this series, we examined the part of the Hero’s Journey called the Magic Flight. This is where the hero begins the final stage of his adventure to go home again.

His journey has taken him back to the threshold he crossed at the start of his adventure. Now he stands on the brink, ready to launch across it and go back to his old life.

But crossing the Return Threshold is another matter. Now that the hero has completed the adventure and is wiser/richer for the experience, he must endure the shock of his return to the world or everyday life. His newfound knowledge has its cost, and he is required to pay it.

In this series, we’ve been following the travels of Dorothy in the Land of Oz to illustrate the Hero’s Journey. We’ve seen that Dorothy’s Magic Flight is literal—a flight through the air. She and her friends, the Scarecrow, Tinman, and Lion are carried by the Winged Monkeys to the Land of the South. The monkeys take Dorothy to see Glinda the Good Witch. The monkeys’ mystical power helps Dorothy and her comrades transcend their trials.

When Dorothy and her friends finally reach Glinda’s castle, the Witch offers Dorothy the first real hope of seeing home again. There is just one more task to complete before Dorothy is assured of crossing the return threshold.

When Dorothy killed the Wicked Witch of the West by dousing her with a pale of water, the girl inherited the Golden Cap. This gave her three wishes from the Winged Monkeys—or at least it gave her the ability to summon them three times.

Now that Dorothy is leaving the Land of Oz, the one thing Glinda the Good requires is the Golden Cap. Dorothy must hand it over in exchange for the ability to cross the Return Threshold and go back to Kansas.

Dorothy complies willingly and hands the cap to Glinda. If this is the cost of going home again, she is more than glad to pay it.

The Witch asks the Scarecrow, Tinman, and Lion what they will do when Dorothy leaves. They each have acquired a kingdom to rule, but they don’t know how to get past the obstacles that lie between them and their destinations. Glinda promises she will command the Winged Monkeys to carry them to their respective kingdoms. She then turns her attention to Dorothy.

What Dorothy discovers is that she’s had the ability to go home all along. Glinda reveals that the silver slippers she acquired on arriving in Oz can take Dorothy anywhere she wants to go. (Yes, it’s true: they’re ruby slippers in the movie “The Wizard of Oz.”)

Dorothy’s friends protest that if not for her, the Lion would still be cowardly, the Tinman would have no heart, and the Scarecrow would have no brain. They show that her adventure has had deep meaning and has changed their lives forever.

Glinda teaches Dorothy that all she has to do is click her heels together and command the shoes to carry her. She will be magically transported back home. She can go at any time.

Dorothy bids a tearful goodbye to her friends, the Scarecrow, Tinman, and Lion, not knowing if she will ever see them again. Holding on tightly to Toto, she clicks her heels together and commands the shoes to carry her back home to her Aunt Em in Kansas.

Instantly Dorothy is whirling through the air, flying across the desert. All she can sense is a blur as the scenery passes and the air rushes in her ears. In a moment, she tumbles onto the grass and lies there briefly, stunned.

When she gets up, Dorothy sees that she is standing on the wide Kansas prairie. Her Uncle Henry has built a new house to replace the one that carried Dorothy away in the tornado. In fact, Dorothy sees that while she has been having an adventure of her own, life in Kansas has gone on without her.

She has crossed the threshold and now must endure the shock of her return, however pleasant it may be. She also discovers that there is no going back to Oz, for the silver slippers were lost in the desert.

5 Steps for Crossing the Return Threshold

Crossing the Return Threshold can be a matter of a long trek or a few quick steps, whatever serves your story best.

As your Hero’s Journey concludes, it will be clear that your hero has been shaped by his adventure to another world. It’s up to him to share the boon of his wisdom with those back home. We’ll cover just how to do this in our next article, the final chapter in the Hero’s Journey guide to writing a non-fiction book.